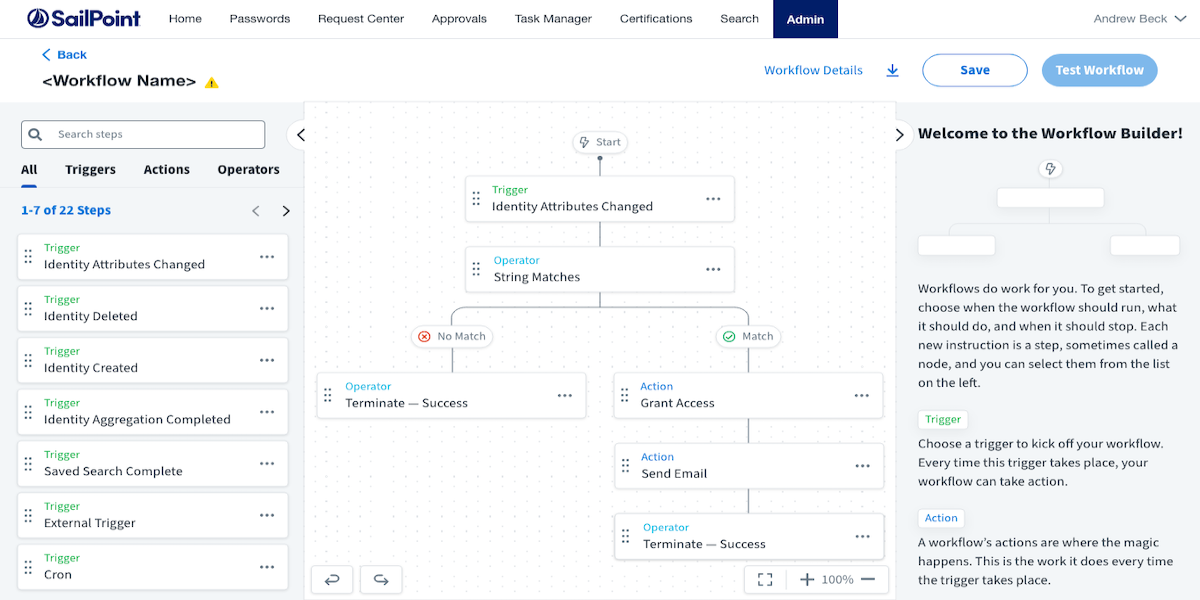 SailPoint Technologies will make it simpler for enterprise IT teams to manage workflows that revolve around identities later this year. During its Navigate 2021: Confidence Redefined conference, the company — which provides tools for securing identities — unveiled SailPoint Workflows, a visual tool for creating and managing workflows via the company’s software-as-a-service (SaaS) platform.

SailPoint Workflows provides IT teams with a no-code tool that enables them to create custom workflows to, for example, onboard new employees, SailPoint executive VP Grady Summers told VentureBeat. Enterprises need a no-code approach to creating those workflows because few IT professionals have both identity management expertise and programming skills. “That’s very rare air,” Summers said.

Scheduled to become available in the fourth quarter, SailPoint Workflow is part of a larger company initiative to enable enterprise IT teams to deploy an intelligent, autonomous, and extensible self-driving identity security system that’s fueled by data from end users. Machine learning algorithms are then applied to surface, for example, who is using which applications or what anomalous behavior might be indicative of a security breach, Summers added.

SailPoint earlier this year acquired Intello, a provider of tools that enable IT teams to discover, manage, and secure SaaS applications, and ERP Maestor, which offers governance, risk, and compliance (GRC) management tools for SaaS applications.

Cam McMartin, a member of the board and special advisor to CEO Mark McClain, is expected to become interim chief financial officer for SailPoint beginning September 1. Meanwhile, current CFO Jason Ream tendered his resignation, effective August 31, 2021, to pursue other interests.

As identity management becomes the focal point around which zero trust approaches to securing IT environments gain traction, it has become apparent that many of the tools used to manage GRC and security are starting to converge. That shift comes as more organizations are shifting to SaaS platforms to manage both GRC and security.

It’s not clear to what degree GRC and security tools will ultimately converge, but as they move closer together, the total cost of implementing and maintaining a zero trust IT environment should decline. In the meantime, most enterprise IT organizations are at the very least reevaluating their approach to managing and securing IT in the wake of a series of high-profile security breaches.

With the shift to working from home to combat the spread of the pandemic, it’s become more apparent that the network perimeter has dissolved. IT teams cannot assume systems reside securely behind a firewall. As such, the only way to now secure what has become a highly distributed computing environment is to verify the identity of not just every user, but also the machines and applications employed within enterprise IT environments.

Many of the district’s 34,000 students are fed up, too, Haney added. In Utah, students can access an app called SafeUT, managed by the Utah

Opinions expressed by Entrepreneur contributors are their own. Over the past year, we have seen brands put under the microscope like no other. It’s changed