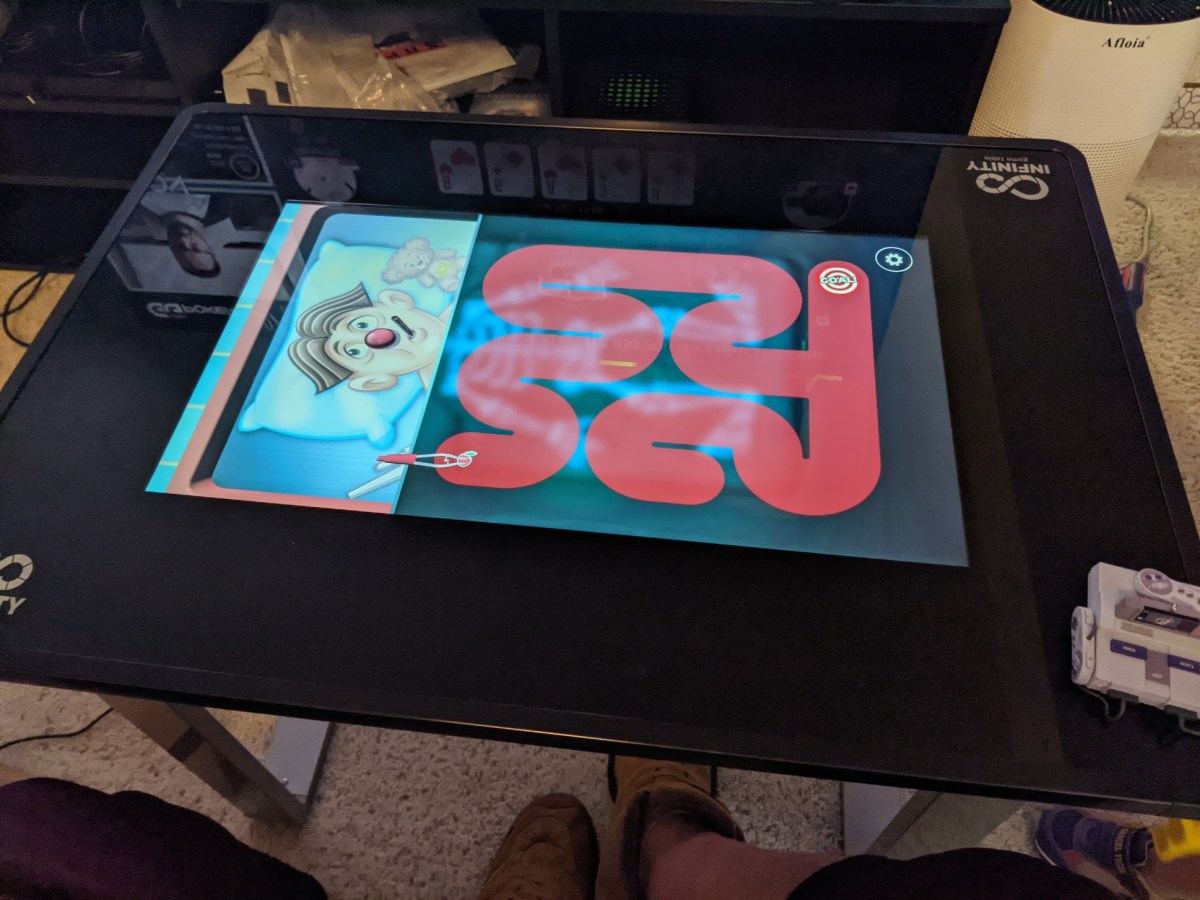 If there’s one thing that the Nintendo Wii showed it’s that all kinds of people want to play games. But in order to get to that audience, games need to present their experiences in a more streamlined and simple way. Today, we have multiple companies attempting to recapture the magic of the Wii. That includes the Intellivision Amico with its smartphone-like controllers. But it also includes Arcade1UP and its Infinity Game Table, which I think has the best chance of finding success.

Now, success doesn’t mean that the Infinity Game Table is going to turn into the next Wii. But I do think it could catch on as a relatively high-priced Christmas gift for families looking for a way to bring everyone to the table on game night. The table itself is a large touchscreen computing platform. You can get it from Best Buy in either a 24-inch ($650) or 32-inch model ($850). And the Infinity comes with dozens of games that range from timeless classics of the public domain (chess, backgammon, Nine Men’s Morris) to brand-name favorites (Monopoly, Battleship, and Yahtzee).

What the Infinity table reminds me of the most is Nintendo’s Clubhouse Games for its Switch console. That bundle comes with 51 “worldwide classics” for only $40. And at first, that might seem like a tough comparison for the Infinity table. Except, I think that Arcade1UP has done a lot to ensure this device makes sense and can deliver on its promises.

You get a lot for your money

Starting at $650, the table puts it above the price of PlayStation 5 and Xbox Series X, but I think that is pretty fair for what you get. For that price, you get the table with its large touchscreen and a huge number of games. If you were to buy sets to play chess, Battleship, Clue, and everything else — well, I’m not gonna do the math — but I think that would probably add up to hundreds of dollars. And what the Infinity table does is gather all of those things into one easy-to-use touchscreen device.

And having a digital hub for your board games is valuable in itself. Games like Monopoly and even Chutes And Ladders have their time costs. You have to commit to setting them up and then putting them away. And you have to dedicate space to store them. All of those things combine to exact a real-world costs that the table mostly eliminates.

As an example, my kids are young. So whenever we’ve tried to play board games, it’s gone poorly. They don’t want to take turns or get into a fight about who gets to play as the ice cream cone in Candy Land. And because of that, I’ve mostly avoided setting up games like Chutes And Ladders for them on our family table. But with the Infinity table, it wasn’t the end of the world when the kids started misbehaving and I had to cut the game short. I simply turned off the table, cleaned up a few snacks, and put everyone to bed.

And then, surprisingly, the next night we tried again, because the setup is so simple, and the kids were much more well behaved. That’s something I would have missed out on with the physical game because I would not have taken the time to set it up for a second night in a row.

Turning furniture into an event

The key to the table’s success in my family is that everyone wants to play on it. It has a big, attractive display when you turn it on. When you turn it off, it’s a sleek-looking piece of furniture. I tested the smaller, 24-inch model, and I’m using it almost like a coffee table in front of the TV in my office. In the evenings, the kids come down to sit with me, and we’ve ended up spending some time on the table almost every night.

It helps that the table doesn’t feel like it’s in the way or that we want to hide it in a corner. It can sit in the middle of the room and not draw attention. Then, when it’s time to play, it’s easy to gather everyone around it.

Arcade1UP also spent a significant amount of time on the gameplay experience. These are not simply ports of Android games. The table’s game developers built the experiences specifically for the device. That means they usually make sense as something that you sit around and interact with from different perspectives on a cocktail machine. It also means that Arcade1UP was able to add features like house rules to Monopoly, Battleship, and other games.

At the same time, the games can feel simple and sterile. Where chess looks glossy and hyperreal in Clubhouse Games, it looks closer to something you’d get from HTML5 on the web. Everything still functions, but Arcade1UP has lower production values than Nintendo — something I’m OK with. It also helps that sitting in a circle with other real humans in your family makes up for a lot of the missing flare in the games.

Expandable, connectable, and easy to live with

Since I’ve started testing the Infinity table, Arcade1UP has added a handful of new, free games. That includes the aforementioned Battleship. And when I’m on the home menu, the machine has a window where it promises more games are coming. Clue is one I’m really excited to try.

So far, all of these additional games have joined the table as free updates, but the company does plan to begin selling some of the more up-scale tabletop games in its store. Soon, you should have the option to get Ticket To Ride and other European-style board games.

But as with all of the games, you can play against other players locally or against friends around the world that also have the table set up in their homes. So while you might lose something in the tactile pieces, you do gain the ability to easily play online while retaining that feeling of a traditional game night.

I have not had the chance to test purchasing or playing those premium-priced games, so I’m judging the table primarily based on what comes with out of the box. And I’m pretty impressed.

The Arcade1UP Infinity Game Table is easy to use and to live with. It will look attractive in most home as a modern piece of furniture. And then when it’s time to play, it’s easy to get set up and to download new games. For a small family with young kids, the 24-inch model is great. And I think the price is pretty good for what you end up getting. And I think that in the right home, the Game Table will get a lot more use than something like an arcade cabinet, table tennis, or other large holiday gifts.

The Arcade1UP Infinity Game Table is available now at Best Buy starting at $650. Arcade1UP sent a sample unit to GamesBeat for the purpose of this review.

Petito’s and then Laundrie’s disappearances have captured national attention, particularly on social media, where the couple extensively documented their van-based travels. The engaged couple, originally

Employee bounce rate increased 27% as companies return to the office