This Framework of Thinking Can Improve Your Leadership Skills

“I just can’t think straight,” my client was sharing. “It used to be easier, and more fun. I felt at ease in my skin and ideas – creativity – was super accessible. But now, every meeting feels loaded. And I don’t share half as much, or as freely. I’m exhausted, stressed and never sure who is supporting or truly seeing me, or who is just trying to jockey for attention.”

My client works in a fast-growing “unicorn” startup. He joined early on and was part of a team of just nine employees in the beginning. There was excitement, generative thinking and the sky was the limit. But two and a half years later and 200 more employees, things have changed. What once felt so kinetic and inspiring feels “thick” and political. He jokingly refers to it as Game of Thrones, with employees all fighting to be seen, to be the best, to win and never fail. Layers have been put in place and he is now in “middle management” versus being exposed to everything when he first started. He is filled with pressure, stress and fear of being wrong. And he fears being “pushed out” by colleagues he feels either play dirty or who just “have swagger.”

Related: 5 Habits of Leaders at the Top of the Ladder

As an executive coach specializing in accelerated growth companies, I hear this scenario all too often. A thriving young company built on a singular great idea loses itself and dies on the vine when innovation stops, culture stamps itself out like a smoked cigarette and everything topples down. Or the opposite happens: The company keeps growing, investment money pours in and people are handcuffed to a company they are forcing themselves to tolerate for the chance to cash out. I also lived this — I led marketing for six startups and saw many of the patterns I now coach my clients to overcome.

I first heard the concept of Green Red Blue aka “The Battery” from the couples counselor my then fiancé, now husband, and I were seeing. I was familiar with the concept at its core, but I had never heard a framework more effective for self-awareness. The framework is based on fight-or-flight, but had a twist I found especially effective. It’s color-coded three emotional states: flow, fight and flight into green, red, and blue.

I began to see more clearly what color I was living in during any given part of the day. When I was feeling creative, relaxed, calm and generative, I was in green. When I began to feel threatened ever-so-slightly, or when I began to feel there was a need to be “right,” I was “in the red.” Key somatic indicators I was in the red were a feeling of anxiety, frustration and a sensation of my chest and “creation” centers closing down. If I moved into blue, I was disconnecting, shutting down and checking out. I call blue the “pull the covers over your head” emotional state.

Related: Power With Purpose: The Four Pillars Of Leadership

When I began executive coaching, I started sharing the framework with my executive clients. What began as a way for my clients to grow their self-awareness around when they were in flow or when they were feeling anxiety or disconnecting soon turned into a way to review entire teams and structures. I began to notice entire teams living in the red. This was signaled by decreasing ideation and innovation, instead traded for fear of failure or speaking up and being wrong. Stress and low resources created more red. Politics and unskilled leadership created red. And where there was red, there was a fire. These teams were cut off from true generative thinking and acceleration was stunted.

So, I created a framework that simply explained Green Red Blue, and I began to use it applied to structures and teams in the business to help “unstick” teams and free them into the green. 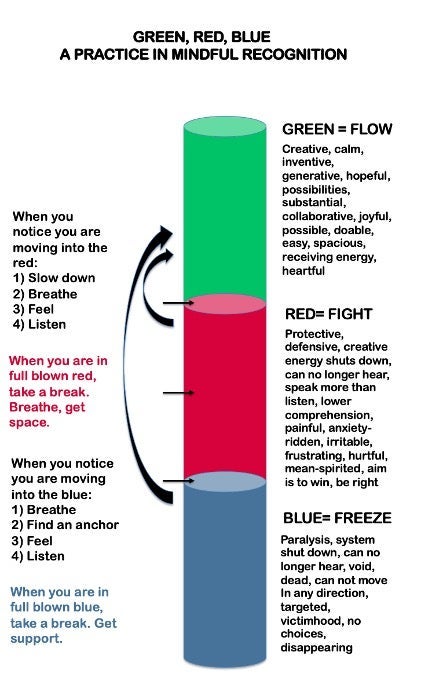 We see all too often where a startup launches with their kernel idea of a product full of excitement, connection and contagious energy. When new organizations are just beginning, the sky’s the limit and moonshot thinking is rewarded, welcomed and actioned from anyone in the organization. But as companies grow, the risk of playing in the red becomes critical to manage. As new leaders who want a larger piece of the pie replace those who started the company, a whole organization can skip into the red and lose its edge.

The best example of an organization going into the blue would be a government-run organization where the employees are powerless to change. We see this all too often and as customers, we can see the listless, checked-out spirits of those who have no voice and who are not seen.

So what can leaders do to ensure they are not playing in the red?

The first step is to notice your emotional state. Learn to regulate your own emotions – to move from the red or blue back into the green.  More importantly, notice the finer space between colors where you begin to slip and to become mindful of your breath, your body, and your emotional state. Sometimes all it takes is awareness and naming what is true in a given moment.

After taking the first step, you can more effectively move your teams into the same awareness. Driving mindfulness into your teams is a practice – just like the practice of mindfulness itself. It takes becoming aware of the inner dialogue of yourself and your team. And sometimes, even the inner dialogue of your whole organization. That enough is a good start to move you back into the green.